There was a time when I was young and dumb and drank coffee only for the caffeine. I bought cheap pre-ground coffee, brewed it in an electric maker that I never got around to cleaning, then kept it warm by reheating it in a microwave oven. I've learned better since, and we now have a number of ways to brew, grind and roast coffee at home. But my favourite way to make coffee has to be the siphon brewer. 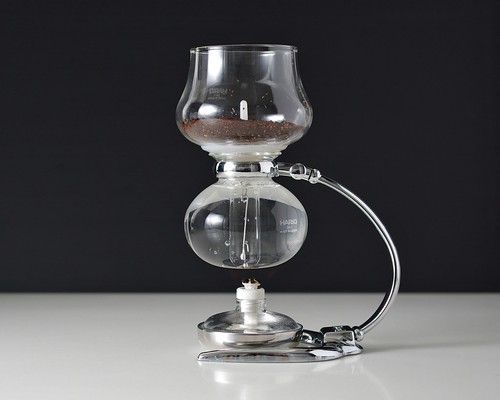 Hario da-1 Siphon Brewer. Coffee grounds in the top bowl, hot water in the bottom bowl. An alcohol heater is bringing the water to a boil.

I had never heard of siphon coffee before I came to Japan. It's an old coffee making method and used to be quite common until electric makers became widespread. It was largely forgotten in the west for many years but it remained popular here in Japan. Several Japanese companies make brewers, and a few coffee chains even specialize in serving it.

When I left NAIST in 2012, I received a small Hario one-cup siphon brewer as a gift. It's one of my favourite things, and I frequently use it on slow, lazy weekends, when coffee is a way to relax and unwind. The one drawback with this brewer is that I can make only one cup at a time, so I usually use it only when I'm home alone. One day I'll get a larger 2-3 cup siphon so we can have siphon coffee together. 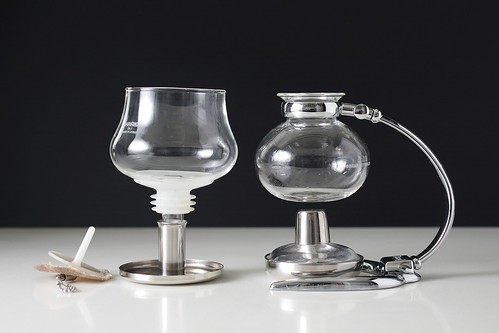 The siphon brewer before assembly. On the left is the filter holder and cloth filter. In the center is the top bowl and the pipe, in its metal stand. To the right is the bottom bowl and the alcohol burner. The filter and ground coffee goes into the top, hot water goes in the bottom, and the burner heats the whole thing.

A siphon brewer works exactly like a spray can. You've got a sealed container with a liquid in the bottom and some empty space at the top. A pipe descends from the top down to the bottom of the container. Pressurized gas in the space at the top pushes the liquid through the pipe and up a hole at the top.

A spray can is filled with paint or other liquid and pressurized gas, and has a push-valve with a nozzle. A siphon brewer is filled with hot water, and when it boils the steam pressure pushes the boiling water up the pipe and into the top bowl where it mixes with the ground coffee. A filter over the hole to the top prevents the coffeegrounds from dropping down into the bottom container. 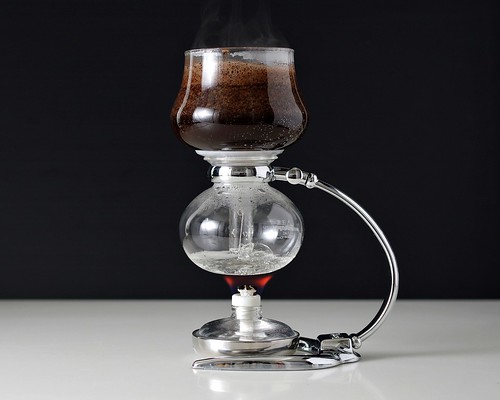 The boiling water has rushed up to the top bowl and the coffee is now merrily brewing away. The steam from the remaining water bubbles up through the coffee at the top. That pressure prevents the coffee from running back down, it mixes the water and the grinds, and keeps the coffee hot as it brews.


Once the coffee is done — about a minute and a half or so — you remove the heat source and the siphon goes into reverse. Without the heat source the steam condenses, the air cools and so the pressure quickly drops. The coffee in the top bowl gets sucked back down through the filter, leaving the coffee grinds at the top. Remove the top and you're left with a bowl of delicious coffee. 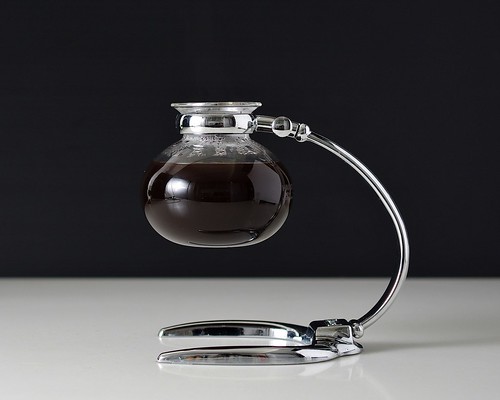 One cup worth of siphon coffee.


Since I had a stack of shots from the brewing process I figured I should try to use them for a simple stop-motion animation. I used GIMP to make a simple gif animation of the process(1), and here's the result.


Siphon coffee is smooth and fragrant, without the bitterness you can get with other methods. It's delicious, especially with good-quality beans. It does take a fair amount of time to prepare and there's a lot to clean up afterwards, so it's not something I do every day. But the process itself is slow and deliberate, almost meditative, so when I have the time, making the coffee is just as enjoyable as drinking it when done. 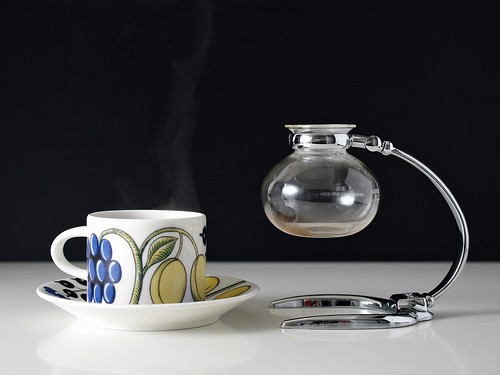 A cup of coffee.


#1 I shot the frames on a tripod and lit with strobes. But the brewer shifted around just a little bit as I handled it, and the ambient background light from a window changed slightly over time. Those subtle changes become very obvious when you stick the frames together as an animation. So I had to use GIMP to manually align the shots and correct the exposure on each one. Makes me appreciate why movie equipment is so oversized, precise and expensive.

I also used GIMP to generate the fading with a fade script. You can set individual frame transition times and preview animations within GIMP itself, and you can save optimized animated gifs directly from a stack of layers. The process is a bit clumsy, and for a more complicated animation I would write a set of scripts instead. But GIMP is plenty good enough for something simple such as this.