What We Did On Our Spring Holiday: Awajishima


We often go to Akashi, a town down the coast east of Kobe. It has a nice sleepy atmosphere, a good market street and some excellent food (octopus fishing is a big thing here). In the harbour we've often seen a ferry go back and forth between Akashi and the nearby island of Awajishma.

If you look at a map, Awajishima is in the middle of Osaka bay, right between the mainland and Shikoku. It's really close — you see it from the Osaka waterfront, and I was looking at the island from my previous job every day — and yet I had never once been there. Ritsuko, an Osaka native, had been there once on a middle-school trip, but never since.


So this time we didn't just look at the ferry; we bought tickets and took the 15 minute crossing to the island. There's two towns, Awaji and Sumoto, and there's a highway connecting the mainland with Shikoku, using the huge Akashi bridge. The ferry doesn't go to any of those places, though, but to a small fishing village called Iwaya near the northern tip of the island. It's really mostly a commuter ferry for people living in Iwaya but working, studying or shopping in Akashi city.

Awai itself is a fishing village and suburb to Akashi. We went mid-morning, thinking we'd eat lunch in the village. But there's only 3-4 places to eat within walking distance of the ferry landing (two of them in the ferry terminal itself) and they were crammed full, with people waiting in long lines outside. Awaji may not be a tourist destination, but somebody forgot to tell the tourists. A large group of Koreans, two buses with boy scouts and a big pile or random people such as ourselves was just too much for the place. 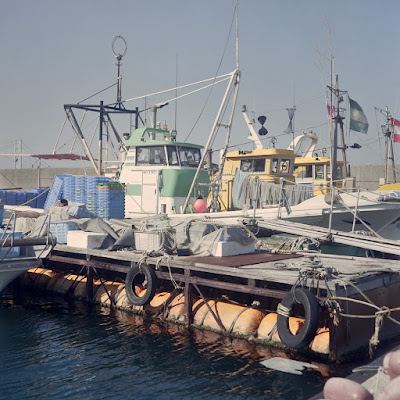 In the end we bought some bread and fruit in the terminal building — there's not even a convenience store, that's how small this place is — and enjoyed al fresco dining overlooking the Seto sea and the Great Akashi bridge.


We took a long stroll along the seaside, looked at the fishing boats and just generally enjoyed an afternoon together with no commitments and no stress. Stop your life for a moment to smell the flowers. Late afternoon we boarded the ferry again and took the train back to Osaka. I can recommend this trip - but don't expect to actually do anything, and if you go, remember to pack a bento lunch.


The pictures here are taken with the Meopta Flexaret, the TLR I bought in Prague last year. Overall I like the results I get with colour film (Ektar 100) using this camera. The camera works fine, although the infinity focus seems to be a bit off. I'll have to take a closer look at that.