If you want to sell news, at least get it right

Here is a fresh new example, from both Asahi Shimbun and Yomiuri Shimbun, based on a white paper from the ministry of justice1. They report that "40% recidivism rate among youths released from juvenile facilities". Repeat crime rate among all arrested minors have risen to almost 32%, and has been increasing for the past 14 years! In 2004 the total rate was only about 27%; it's risen 5 points, or almost 20% in these eight years! Panic! Mayhem! Blood on the streets! Mass Hysteria!! Cats and Dogs Living Together!!!

Take a look at the graph from Asahi (reproduced here, as newspaper links have a tendency to disappear): 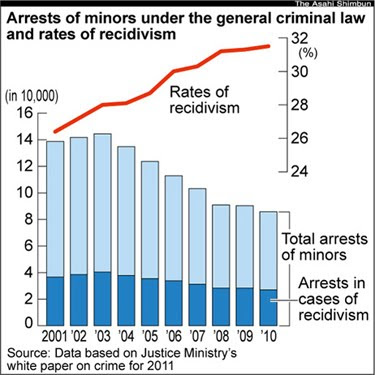 See something interesting? The rate of repeat offences — the red graph at the top — have indeed gone up. But look at the dark blue bar at the bottom: the number of repeat offenders have dropped, from around 4 minors in 10000 in early 2000's down to about 2.7 minors last year. That's a drop of 30%! Let me say it again: the number of repeat juvenile offenders have dropped by a third in ten years. This is good news.

And look at the light blue bars, with total juvenile arrests: from around 14 per 10000 in 2000-2002 down to about 8.5 last year. That's a drop in arrested minors of 40%! So, the proportion of arrested repeat offenders have dropped, but the total number of arrests have dropped even more. That's how the repeat offender rate has been rising — not from any worsening trend, but from two good trends, with one improving even faster than the other.

That's nowhere to be found in the Asahi article though. Even with their own graph in plain view, the text discusses only the repeat offences and never mentions that the total rates are down, not up. Yomiuri notes in a single sentence that the total number of offences has been dropping, with no further comment or any attempt to connect it to the rate.

Why the alarmist treatment? One reason can be that a bad news angle sells more papers, and the editors are more interested in their sales numbers than in the accuracy of their reporting. That, or the reporters at both Asahi and Yomiuri are so innumerate that they do not even realize what these figures are telling them.

I've been interested in the Asahi online subscription, where you get the full paper online at another 1000 yen over the subscription we already have. I'd happily pay for factual, balanced, well-researched news, but shoddy pieces like this are putting me off the whole idea.

#1 I've ben browsing their site but I can't seem to locate the white paper itself; it's either not obvious from the title, or it is obvious but my Japanese is insufficient to understand it. This is unfortunate, as Asahi talks about 40% youth repeat offenders while Yomiuri seems to talk about repeat offenders in general, though possibly about juvenile criminals that get arrested again as adults. I can't check this without the original report. Why can't media put links to their source material now that it's so easy to do?